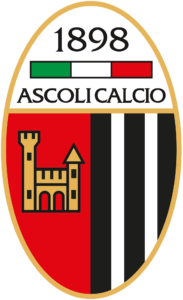 Ascoli Calcio 1898 FC is an Italian football club based in Ascoli Piceno in the Marche region of Italy. Known as “La Regina Delle Marche” or the “Queen of Marche”, Ascoli is one of the oldest and most decorated clubs in Italian football. Ascoli was founded in 1898 and have competed in more than 40 seasons in Italian football’s top competitions, Serie A and Serie B. The team is known as the “Picchi” or “The Woodpeckers” and are well-known for their home kits with their signature vertical black and white stripes.